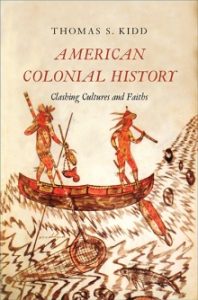 This is no easy task, of course. Kidd has to be selective, and much more can be said about the events and issues that this Baylor University historian discusses. But Kidd sounds the right notes here, and his book is a valuable contribution to the field of American colonial history—one whose structure (introduction, thirteen chapters, and conclusion) works well in a fifteen-week semester course.

For some, the theme of conflict in colonial America is a vital, if jarring, correction. We err if we assume that English Puritans settled in New England and established a city on a hill without any resistance or without participating in any of the conflicts. But for most, the theme of conflict does not surprise us.

What often receives less attention is the theme of religion. Yet as Kidd so aptly demonstrates, to ignore the vital place of religion leaves us with a thin description of early America and without an essential element for explaining much of the conflict. For many, “religion was not only the path of salvation in the next life, it was a primary way of making sense of what was happening to them in the present life” (xii). It is for these reasons that Kidd aims especially to give readers “a distinct sense of how pervasive religion was in colonial America, and of the varied functions that religion served in the era, functions that were variously inspiring and appalling” (xii).

As one would expect, given the aims of the book, American Colonial History is marked by its balanced treatment of the subject matter. Kidd himself, of course, holds deep convictions about religion and morality, but in this volume he resists passing judgment or prescribing what one ought to believe and instead seeks to promote deeper understanding of the whats, hows, and whys of colonial American history. That sometimes makes for uncomfortable reading, because not all the episodes from this era were palatable or pretty. Many gruesome encounters littered the American landscape and remain blights to this day. Kidd even admits that “much of the story of colonial America . . . is bleak” (xii). In presenting the American colonies with warts and all, Kidd does us a favor, forcing us to wrestle with how modern America grew up in its adolescence.

A key point, noted above, that must be emphasized in Kidd’s book is his focus on diversity. He attends to geographical diversity, discussing the Southwest and Caribbean, the Eastern seaboard from New England to the Middle Colonies to the South, the backcountry, and the West. He is careful to discuss the lives of women, showcasing many of their stories and impact throughout the book. He gives particular (and deserved) attention to Indians, telling how their lives were transformed by the arrival of Europeans, how their patterns clashed so harshly with those of the colonists, and how their presence colored so much of early American settlement. He looks at the diversity of European colonizers, attending not just to the English but also to the Spanish, French, and Dutch colonizing efforts. And then there’s the wide variety of religious groups that Kidd treats—such as Roman Catholics, Congregationalists, Baptists, Quakers, traditional Indian spiritism, and slave religion.

The diversity in Kidd’s book can be illustrated by another valuable element of the book: its inclusion of three to four primary source readings at the end of each chapter. These selections give the reader a good taste of what American colonial life was like and of what issues animated the wide diversity of people who dwelled or ventured there. They range from Christopher Columbus’s observations on Hispaniola, Bartolomé de las Casas’s detailing of Spanish cruelties against Natives, and James Read’s report of General Edward Braddock’s defeat to Mary Rowlandson’s narrative of being abducted by Indians, an account of a slave rebellion, and the African American Phillis Wheatley’s comments on slavery in a letter to the Indian minister Samson Occum.

One reading that stood out to me was William Penn’s description of the Indians, in which he relates his detailed and fairly glowing observations about the Natives. As one brief example, he states, “I must say, that I know not a language spoken in Europe, that hath words of more sweetness or greatness, in accent and emphasis, than theirs” (132). This stands in stark contrast to many European views of the Indians and also highlights the value of reading those from early America in their own words.

Kidd also brings an artistry to his work that makes it a pleasurable read. He opens his chapters with intriguing, illustrative vignettes. He writes in a captivating style that brings to life the stories of those who lived in the American colonies. Quite satisfying is the full circle of his opening story of Cahokia and his return to that story at the end of the final chapter.

All in all, Kidd’s American Colonial History is a welcome addition to the literature on the American colonies. It provides an informative, engaging overview of this important historical time and place for newcomers, and its presentation of the American colonies as oriented around the themes of religion and conflict delivers insights even for the expert in the field. A recommended volume for anyone interested in early American history.