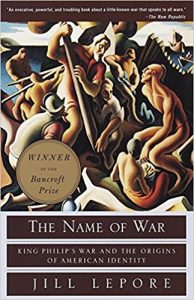 First, what was King Philip’s War? In short, and without delving into all the historiographical debates, the war took place from 1675 to 1676, and it epitomized the conflicts between Indians and English colonists in seventeenth-century New England. At stake was the identity of those who would call themselves Americans for generations to come, and at that point, who that would be was up for grabs.

What launched the war was the alleged murder of a Christianized Indian, John Sassamon. Those charged and convicted of the murder were three associates of the sachem Metacom, known to the English as King Philip, and the execution of these three Indians led Philip to retaliate. Only a few years earlier, many feared that Philip was going to start a war, but he didn’t strike until 1675. What followed was immense brutality on both sides. We expect Native scalping, but the carnage went much further than that. What may surprise some is that the colonists adopted many of the Indians’ violent methods. And this, Lepore insightfully observes, led the colonists into an identity crisis. Were they truly English if they acted like Indians? How would these two groups define themselves?

In the end, after months of conflict, destruction, and death, Philip was killed by another Indian siding with the English, and so ended the war of weapons. But the war of words continued, and the victors shaped the war in such a way, Lepore contends, that salvaged their English reputation and identity and denigrated that of the Indians. A fascinating component of this theme extends to the reception history of the war in the eighteenth century, which tells us much about the influence of history and how it is remembered among a people.

Lepore’s point about how people can shape the memory of the past through their words is very important. So often we make decisions in the present based on how we perceive the past, even if that perception is nothing more than a misperception. And we have become quite good at shaping the past to our own benefit. These warnings should be well heeded.

At the same time, I cannot help but wonder if Lepore, in trying to right the wrongs of the past, has created new misperceptions. And these arise from the skeptical historical methodology common in historical scholarship today. She romanticizes the Natives and perpetually puts the colonists in a negative light. It is almost as if the English could do no right. Even the efforts of missionary John Eliot to learn the Massachusett language of the Natives were marred, in Lepore’s view, by his ultimate aim of seeking to evangelize them—a goal assumed in her view to be ethnocentric and paternalistic.

She also reads against the grain in ways that sometimes stretch belief. For example, she describes how the English colonists were filled with disgust as they recounted the gruesome torture and killing of an Indian, but then she adds that “the other side of disgust is desire, and, despite their protestations to the contrary, clearly the English feel that, too” (12). She derides John Eliot’s relationship with Sassamon as ultimately colored by power politics, with Eliot using his power for his ultimate purposes—clearly a hermeneutic of suspicion (31–32). She depicts the English act of beheading as barbarous and the Indian act of beheading as respectable and religious (179–80). Lepore also explains the Mohegan processes of torture and execution as “collective catharsis” in the form of “an elaborately ordered ceremony,” while she describes the English account of such torture as marked by “strained and twisting moral posturing” (13–14).

Let me put this another way: Both the Indians and the English engaged in practices that we would condemn today, yet understanding why they did so is what history is supposed to help us with. Lepore succeeds in helping us understand the Indians and their practices and motivations, but when it comes to the colonists, she does a better job of denigrating and judging them than of understanding them. Good history ought to help us understand both parties, not just one.

To be sure, Lepore offers several illuminating details on this important colonial war. King Philip’s War was “a defining moment” (167), as Lepore rightly argues, and she helps us see why this is so, especially as it relates to American identity. She also guides us to a firmer understanding of the Indians (who were often treated unjustly), even if she romanticizes them to a degree. But historians should be warned that there are dangers in this kind of historical methodology—as popular as it may be among professional scholars in universities. In reading against the grain too much, one might just wipe away some patterns completely, eliminating authentic elements in the stories of history that are necessary to fully understand and explain the past.